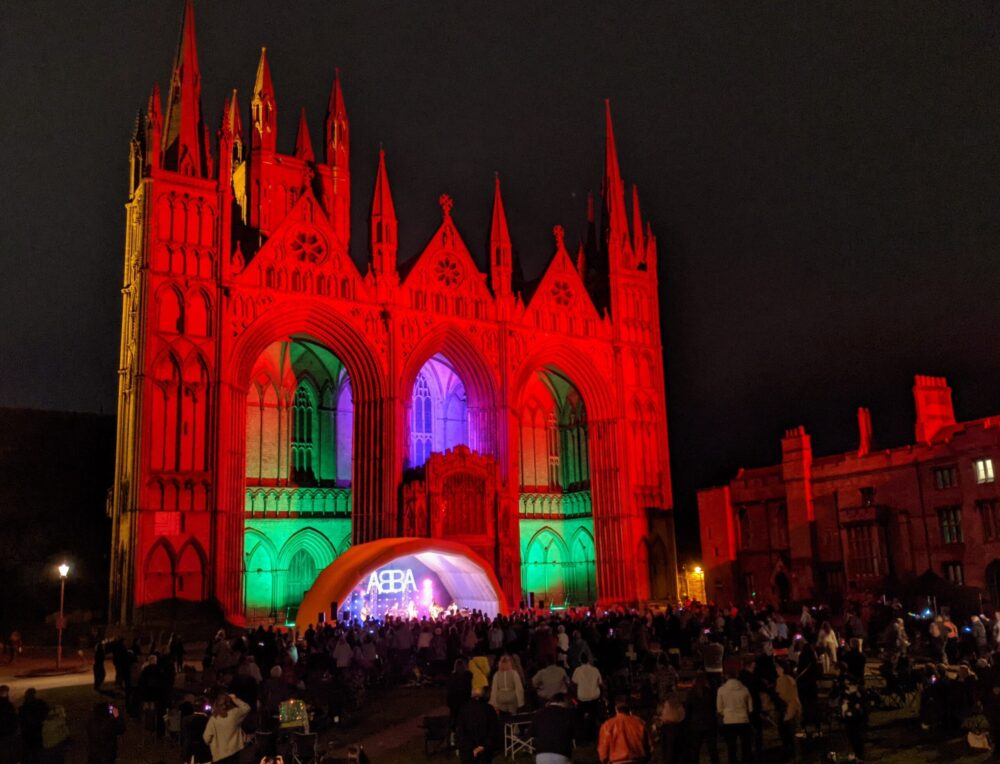 The magnificent west front of Peterborough Cathedral was lit by a new state-of-the-art LED lighting system for the first time on Sunday 29 August 2021, viewed by guests as they left the popular 21st Century ABBA concert that evening.

The colourful display, curated by Elite Electrical Eastern who installed the low-energy-use system, demonstrated the diversity of colour that can now be achieved on the west front via simple digital controls rather than the time-consuming and electricity-hungry process previously used.

The new system has been installed as part of a wider programme of improvements to the outdoor spaces around the Cathedral, funded by a grant via the Cambridgeshire and Peterborough Combined Authority.

As a result of the new system, the Cathedral will be able to further reduce its carbon footprint for the normal floodlighting of the west front, and can more easily be lit occasionally to mark special themes, events and services. The next occasion for this will be when the west front is lit in pink and blue for the Baby Loss Awareness service on Saturday 9 October.

The Very Revd Chris Dalliston, Dean of Peterborough, said: “It’s wonderful to see this new lighting in place. I know it has taken much hard work and dedication from the team at Elite Electrical Eastern who have gone over and above to ensure that the lighting system not only works well but is a credit to the architecture of the building. With their generous help, and thanks to the grant that enabled us to embark on this  project, the Cathedral can continue to be a visible landmark for the city.”

Peter Poli, Managing Director of Elite Electrical Eastern, explained: “The opportunity to work on a world-renowned, historic building doesn’t come along very often. So, when the team at Peterborough Cathedral contacted us to install a bespoke lighting system, we felt honoured to take on the challenge.

“During the initial site survey, we were struck by how the sunlight bathed the building. It was a breath-taking spectacle. Our brief was to create that same wow-factor; for the building to be enjoyed as much when the sun goes down and continue to take pride of place in the city. Given the Cathedral’s history, famous as the burial place of two queens, we knew we had to pull out all the stops.

“The final result is a project that Elite Electrical Eastern is very proud to have been a part of, and one that we can also enjoy ourselves every time we pass by.”

The space under the Norman Arch, which links the Cathedral Precincts to Cathedral Square, has also benefitted from improved lighting.