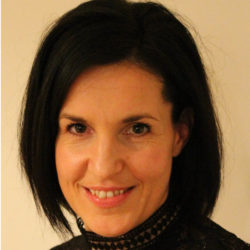 Mary’s background has always been in languages. Her love for languages started as a small child during holidays to France when she would be sent off to the shop by her multi-lingual parents to buy the bread and milk in the morning. There was no doubt as to what she would study at university; the difficulty was choosing which language. In the end Mary couldn’t chose, so decided on a joint honours degree in both French and Spanish.

Mary put these languages into good use in numerous international sales roles, as well as travelling the world, spending some time in South America. Not content with two languages under her belt, Mary spent some time in Israel to learn Hebrew and then did evening classes to learn Russian.

With her experience in international sales, and her love of languages, it made perfect sense to join the family business in 2014, when Mary started working at Anglia Translations Ltd, a successful translation company founded by her father over 25 years ago in 1992.

Mary is now the Managing Director of Anglia Translations Ltd working with a huge variety of companies from start-ups to recognised global brands, supporting them to expand into overseas markets. Active in the local business networking scene, Mary enjoys working with the Chamber and supporting businesses in their first forays into the world of export.