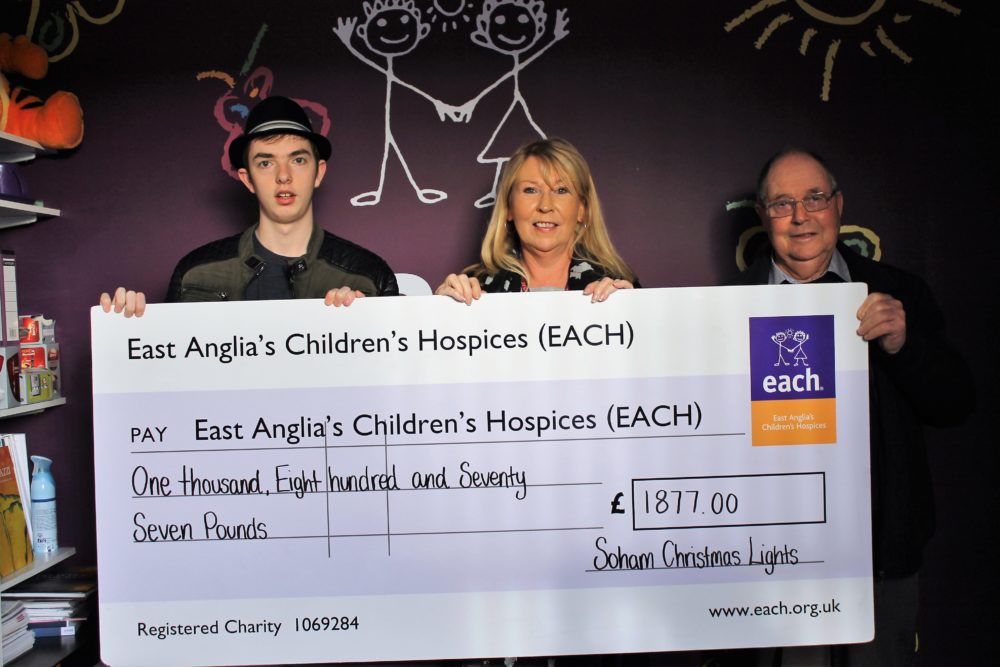 Grandparents who completely cover their Soham home in lights each Christmas have raised a record-breaking amount of money.

Helen and John Attlesey, who live in Julius Martin Lane, have been displaying luminous Santas, snowmen, reindeers and pretty much every type of festive symbol that exists since 2012. The display now features too many objects to count, taking months to set up and keeping the retired couple working right up until showtime.

They foot the electricity bill themselves and try not to pay too much attention to it, instead preferring to encourage donations for East Anglia’s Children’s Hospices (EACH), Great Ormond Street Hospital and Dreamflight, all of which supported their family when, at the age of six, grandson Jake started suffering from a serious form of epilepsy.

Seizures, occurring once every hour during the worst period, meant Jake stopped walking, talking, eating and drinking. He was given 12 to 18 months to live, but surgery to remove part of his brain eventually stopped the seizures and allowed Jake, now 17, to get back on his feet.

Helen said: “It all started off as just a bit of fun, but it’s grown and grown each year. We have to start putting the display up in September now as there are so many lights and wall features. We’d like to thank our friends Cora and Roger for helping us put up the display and to all the wonderfully generous people who donate.”

People who visit the lights display are able to put donations in a box on a wall. Helen and John estimate they have collected a total of £25,000 over the years, with £5,733.74 of that having come from a record-breaking 2019.

The couple, along with Jake, recently returned to EACH’s hospice in Milton to give the charity its share of the money, £1,877. GOSH and Dreamflight have received equal amounts, and Highfield Ely Academy, where Jake is a student, £102.74.

Karen Newton, EACH Community Fundraising Manager, said: “We’re so grateful to Helen and John for continuing to give back to us, and it was great to see them along with Jacob recently. What they do is incredible and that’s clear from how those who visit give so generously. From our Milton hospice, we currently offer care to 135 children and young people with life-threatening conditions, as well as support to 96 family members, and we simply couldn’t do this without the efforts of people like Helen and John.”

For more information about EACH go to www.each.org.uk.