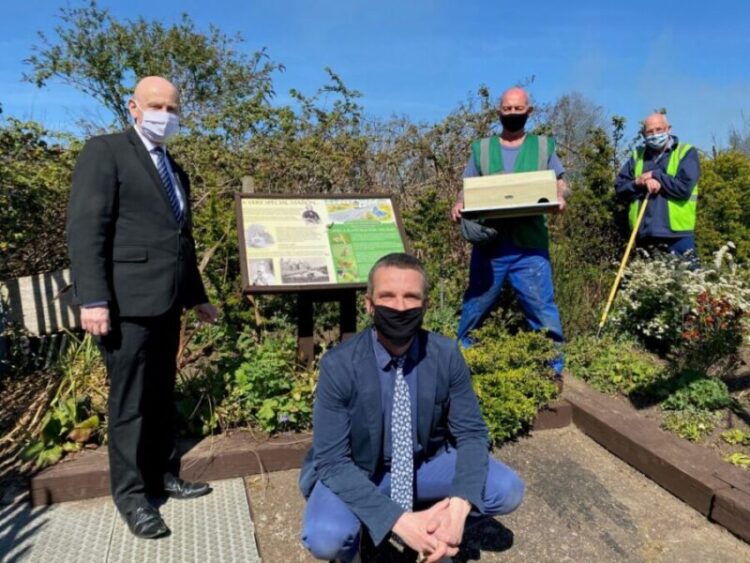 The new partnership will see all 56 station gardens across the rail network in East Anglia added to WildEast’s ‘map of dreams’ which is tracking the amount of land pledged to help meet WildEast’s target of giving 20% of the region back to nature by 2050.

The WildEast movement aims to return 250,000 hectares back to nature and hopes that over 1,250,000 people from across the region will join the movement to help reverse the shocking decline in the area’s native wildlife which is suffering badly from habitat loss.

Statistics show that, since 1970, many species have suffered including tree sparrows whose numbers have fallen by 85 per cent, common toads, 68 per cent, nightingales, 93 per cent and hedgehogs whose numbers down from 30million to just 1 million.

WildEast aims to reverse this decline by asking everyone, including farming estates, industrial estates, housing estates, schools, gardens, allotments and churchyards, to give whatever land they can back to nature. This can mean planting wildlife friendly areas or simply leaving the land as space for nature. These pledges are illustrated on the Map of Dreams at wildeast.co.uk/we-pledge #MapOfDreams

A recent survey found that a wide range of creatures are visiting Greater Anglia’s 56 station gardens including many different types of butterflies as well as bees, slow worms, bats, foxes, deer and many varieties of birds, recording over 200 different species of flora and fauna.

Argus Hardy, one of the WildEast founders, said: “Having Greater Anglia on board with WildEast is incredibly exciting and we are very proud to be able share their journey as they become part of a wilder Greater Anglia and a wilder east.

“The WildEast is aiming to inspire a regional culture change in wildlife recovery that everyone can engage with, whatever their scale and land use. Not just farms and farmyards but backyards, schoolyards, churchyards and across all businesses. Central to this has been what we have called the Map of Dreams, a co-creational space where we record and celebrate nature recovery projects. Through the work of Greater Anglia and other exemplars we hope to encourage everyone to be inspired, get involved and add their pledge to the map.”

Greater Anglia’s Customer and Community Engagement Manager, Alan Neville, said: “We’re absolutely delighted to pledge our station gardens to the WildEast movement as part of our desire to be at the forefront of the region’s green recovery from the pandemic.

“Rail is already the greenest way to travel, but thanks to the care and attention of our team of station adopter volunteers, we also have thousands upon thousands of plants and wildflowers thriving at our rail stations which helps not only to make them more welcoming, but is contributing to biodiversity and helping to support fragile wildlife populations locally too.”

The railway is increasingly recognised by ecologists as a ‘green corridor’ which provides a sanctuary for many different kinds of flora and fauna.

Commenting on the importance of connecting habitats to allow wildlife to move around a landscape, David Dowding from Ipswich Borough Council’s Wildlife Team, said: “In the modern landscape where sizeable patches of wildlife habitat are limited, connectivity is crucial in the viability of the populations of many species.

“Habitats tend to change in suitability over time so wildlife needs to be able to move between sites and this also ensures genetic diversity.

“Railways provide superb corridors to allow species to move between sites, so by creating wildflower patches at railway stations we are providing a series of accessible oases that together form one big nature reserve.”

Greater Anglia’s team of station adopters – who help to look after their rail stations for the benefit of their communities – increased the total area of station garden across the network by 14 per cent last year and devoted much of it to creating wildlife friendly areas. In 2020, despite the challenges of the pandemic, the volunteers tended to over 6,400 square metres of railway land – the equivalent of five Olympic-sized swimming pools – which will provide habitats for local wildlife as well as making the stations more attractive and welcoming.

A report by Bug Life (the invertebrate conservation trust), ‘Managing Transport Corridors for Pollinators’ states that transport corridors, such as railways, provide safe habitats, food and nesting sites for pollinators and very importantly, help to connect fragmented remnants of other habitats such as species-rich grassland, heathland and woodland.

Stations have a role to play, therefore, so as not to become ‘dead spots’ within the corridor which would prevent pollinators moving around the landscape and make them more vulnerable to the effects of habitat loss and climate change.

Greater Anglia has joined the rest of the rail industry in pledging to make stations across Britain more sustainable.

Action to reduce waste, support local wildlife and cut the carbon footprint of railway stations will be informed by the industry’s new Sustainable Stations: Best Practice Guide, which details ways in which train operators can meet this commitment in support of global goals of decarbonisation, reducing waste and supporting local plant and animal life. The document will also be used by train companies when agreeing future contracts.

With rail accounting for just 1.4 per cent of transport emissions despite representing 10 per cent of all journeys, rail companies want to go further, faster, to get the UK on track to meet its net-zero commitment.