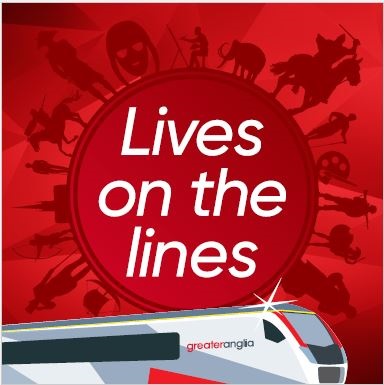 A Greater Anglia podcast series which takes people on an audible journey around East Anglia has won a top national award.

‘Lives On The Lines’ – developed by Greater Anglia and its community rail partnerships – received a Bronze Award for the Best Branded Podcast at the British Podcast Awards.

The series – which can be found at smarturl.it/livesonthelines – invites listeners to take an audible journey to discover majestic coastlines, the phenomenal wildlife of broads and fens, breathtaking cathedral cities and magical market towns of Cambridgeshire, Essex, Norfolk and Suffolk – and meet the people that make them such unique and special places to live, work and visit.

Special guests include Hugh Somerleyton, who discusses his ambition for rewilding a large area of the region through the WildEast movement, Laura Howarth, Archaeology and Engagement Manager at National Trust Sutton Hoo, who explains how the discovery of an Anglo-Saxon ship burial on the site revolutionised our understanding of early England, Dr David Waterhouse, Senior Curator of Natural History & Geology at Norfolk Museums Service who reveals the secrets of North Norfolk’s fossil-rich deep history coast, and Mark Bills, Director of Gainsborough’s House Museum, who sheds light on the life and work of one of England’s greatest landscape painters, Thomas Gainsborough.

They are joined by local tour guides, museum curators and some of Greater Anglia’s volunteer station adopters, who share their experiences of living and working in the region and help to tell the story of each county’s unique landscape, culture and history and divulge some of its secrets.

Greater Anglia’s Customer and Community Engagement Manager, Alan Neville, said: “We teamed up with our community rail partnerships to make this podcast because we wanted to showcase the amazing people and places that make this region so special.

“We are delighted it has been recognised with an award and hope that it will inspire people to come aboard and discover the wonders of East Anglia for themselves sustainably by train and could even be used like a guided audio tour as the scenery rolls by.

“On behalf of Greater Anglia and our community rail partnerships, I would like to extend a huge thank you to everyone who helped to make this series possible, especially all the guest collaborators who have helped to build a fascinating insight into our region.”

There are six episodes in total covering six of Greater Anglia’s branch lines that are supported by a community rail partnership.

The podcasts were created by Fresh Air Production and are produced and narrated by Katherine Kerr.

Greater Anglia has another podcast series, Life on Rails, which gives listeners a behind the scenes look at the company with interviews with members of staff and a special guest in every episode who is sent on a rail journey in East Anglia.

Life on Rails, also produced by Fresh Air Productions, can be found on all podcast platforms and at greateranglia.co.uk/podcast.