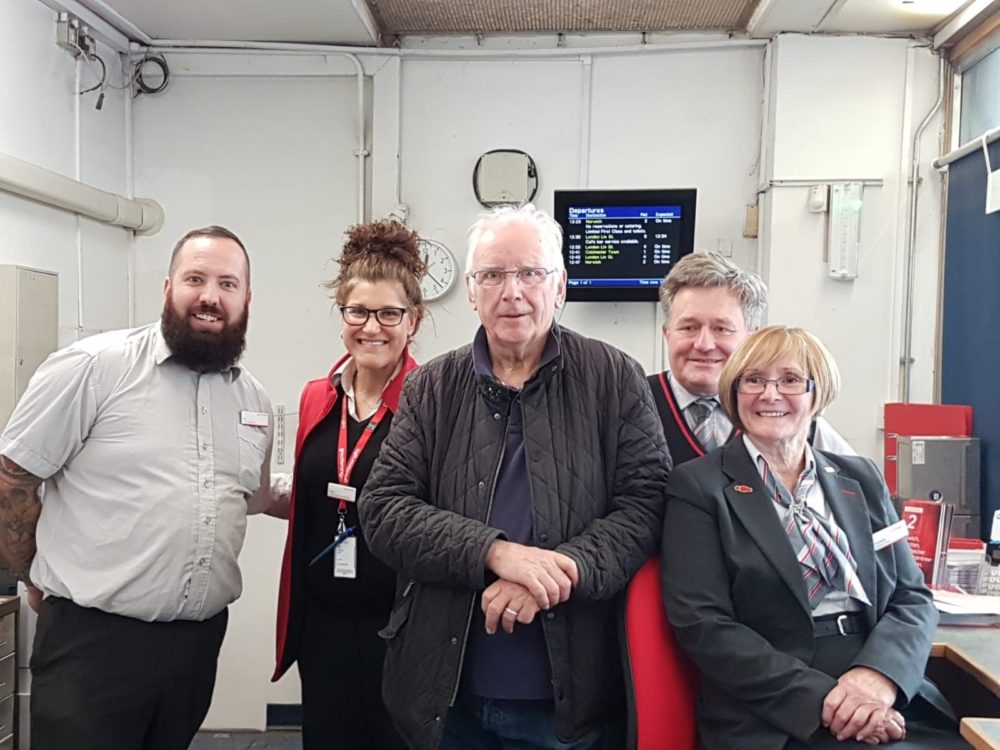 Pop legend Pete Waterman spent a day on the Greater Anglia network talking to staff and telling them about the railway staff charity which he heads up.

The hit musician is president of the Railway Benefit Fund (RBF) and has many connections with the railway. As a teenager he was a fireman on a steam train and he now owns six steam trains himself.

During his day with Greater Anglia, he spoke to staff across the company including at Colchester station, where he opened a new customer services office.

He got a behind the scenes tour of the Network Rail signal box at Colchester and he also addressed a senior management meeting at Greater Anglia’s Stratford Academy.

He was shown round ticket offices, ticket barriers, an Intercity café bar, Liverpool Street station and Greater Anglia’s control centre at Romford, before jetting off to Los Angeles to work on the next series of X Factor.

Pete said: “I’m president of the RBF and every now and then we do these walkabouts in which we go round and talk to all the staff, because it is a railway staff fund, and it’s only available to rail staff. We’re here to help the staff and their dependants.

“Without the railways I’d not be in music, because when the railway brought the electrics into my home town of Coventry, it meant that I didn’t have to live in London, so I commuted every day for 15 years.

“I now live in Cheshire, commute every week by train to London and so trains are as important to me as music.

“I’m involved with five different railway companies now in some way or other and I love every minute.”

Katy Bucknell, Greater Anglia HR director, said: “The railway is a great industry and people who work in it become a ‘railway family’. The Railway Benefit Fund is a fantastic charity which is able to provide additional support to staff in need.

“We were delighted to host Pete Waterman. He was brilliant with our staff and most entertaining at our senior management meeting.”

Jason Tetley, Railway Benefit Fund Chief Executive Officer, said: “We would thank Greater Anglia for arranging Pete’s visit. This reflects Greater Anglia’s commitment to supporting their staff at a time of change across their network. We look forward to working them over the coming months to ensure staff can access the charitable services we provide that Pete was promoting in his own inimitable style!”