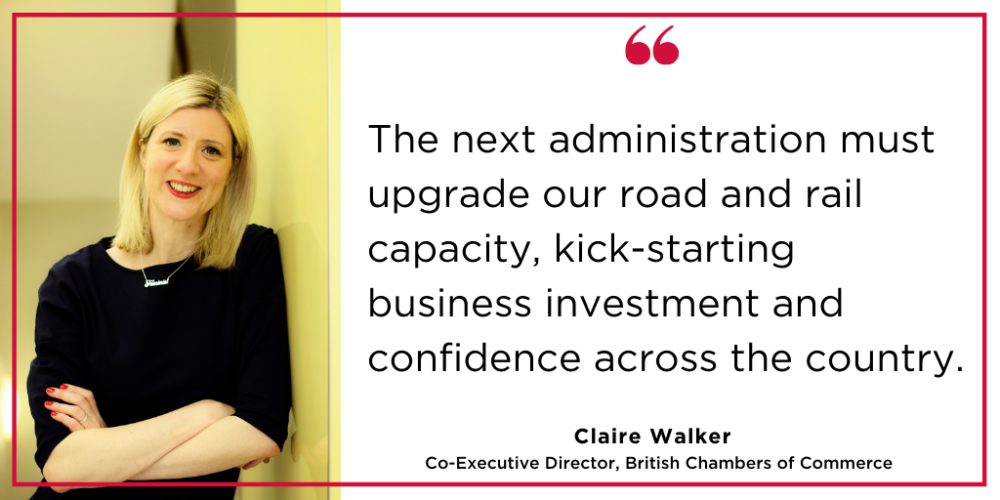 UK businesses are even less satisfied with UK infrastructure than they were a year ago, according to research published today by the British Chambers of Commerce (BCC) and Stagecoach.

The survey of 1,200 business leaders finds that only around one third (35%) of UK businesses feel that the UK road network is meeting their needs when reaching customers, suppliers, and employees. This is a reduction from 47 per cent in 2018. 60 per cent had experienced delays resulting in increased travel costs, loss of business or client dissatisfaction across a one-month period.

Satisfaction with the UK rail network is even lower. Less than one quarter (24%) agree that it is meeting their needs. In 2018, the figure stood at 34 per cent.

BCC Co-Executive Director Claire Walker said: “This election has generated a barrage of promises on infrastructure spending, but unless we see real action in the early months of the new parliament, our hard-pressed firms will struggle to deliver the economic resurgence we desperately need. Upgrading our road and rail capacity would send a vital signal that businesses are finally being heard, would kick-start business investment across the country and will pay dividends long into the future.

“Alongside an immediate commitment to revitalise our ageing roads, the next administration should waste no time in delivering HS2 and promised investment in Northern Powerhouse Rail as part of a UK-wide high-speed rail network.”

Stagecoach Group Chief Executive Martin Griffiths said: “Britain’s congestion crisis is getting worse, directly impacting businesses and their employees, as well as causing further damage to air quality in our towns and cities. This research underlines a growing frustration that, despite transport authorities having powers right now to improve our road infrastructure, there is a lack of radical action to address the problem.

“If we are serious about supporting jobs and our regional economies, as well delivering cleaner air and healthier communities, we need urgent measures to prioritise public transport and incentivise a large-scale switch from cars to more sustainable bus and active travel.”

In 2020 and beyond, business priorities for the next UK government, the BCC is calling for public investment in infrastructure to rise to at least 1.4 per cent of GDP per year – exceeding the funding guideline of 1.2 per cent recommended by the National Infrastructure Commission.