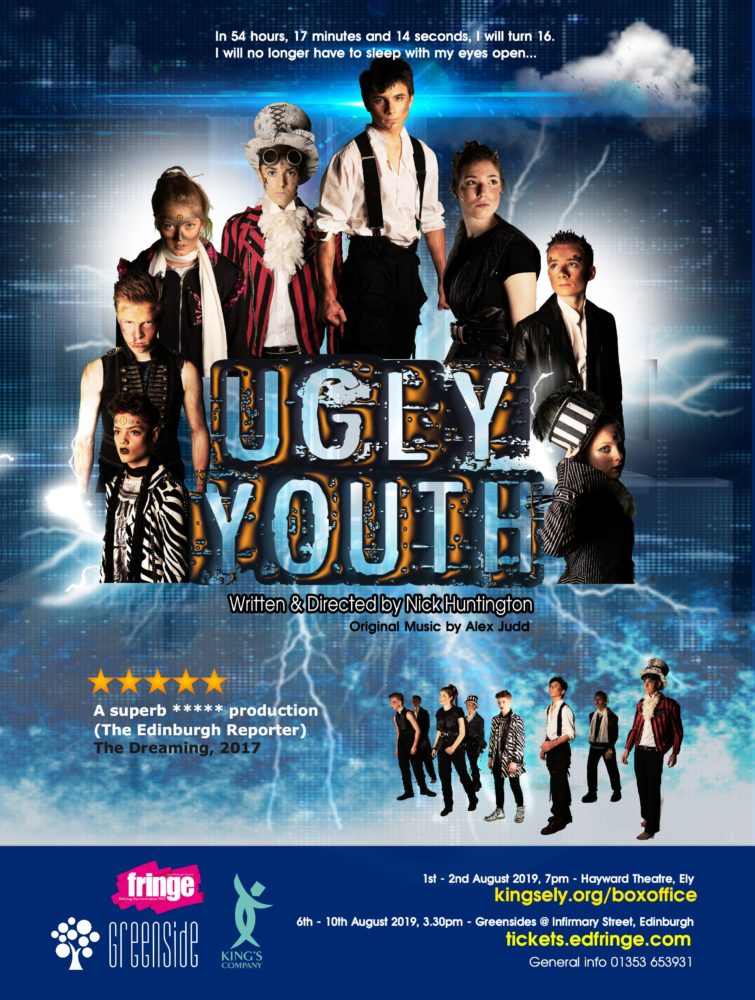 Actors and actresses from King’s Ely will be treading the boards at the world’s largest arts festival this summer – the Edinburgh Festival Fringe.

More than 20 King’s Ely Senior students are starring in Ugly Youth, a gritty, original play written by King’s Ely’s Director of Drama and Theatre, Nick Huntington. The production is being staged in the school’s Hayward Theatre on Thursday 1 and Friday 2 August before making its way to Greensides, Infirmary Street at the Edinburgh Fringe Festival from 6-10 August.

The play is set in 2082 when the population over reaches its estimate and peaks at 18 billion. The 2099 Birth Act is implemented and parents need to apply to have children – selection is based on factors such as health, relationship status, wealth, race, sexuality and subject to severe background and social networking checks. Arkin, a reputable fighter, loner and illegal child is tracked down by the Ugly Youth faction in an attempt to help them revolt against the UN’s tyrannical reign.

Mr Huntington, who is directing and producing the show, first conceived the idea of Ugly Youth in 2017 on the train journey back from their previous Edinburgh venture. He said: “It’s been such a privilege to write a play for our pupils but it’s also rather nerve-racking. What would they think? They have, however, been very kind, and have thrown themselves head first into the fantastical, cynical world in which the play exists. It’s demanding physically, and emotionally – and I think audiences are going to be in for a real theatrical treat.”

It is the second time that King’s Ely has been represented at the Edinburgh Fringe as in 2017 an exciting partnership between the school and Viva! Youth Theatre Group in Soham saw students and members of the group staging The Dreaming, a show based on Shakespeare’s A Midsummer Night’s Dream.

Both performances of Ugly Youth, which contains some adult language and scenes of violence, at the Hayward Theatre start at 7.00pm and tickets, priced at £6.00 each, are available at www.kingsely.org/news-events/box-office/

Performances at the Edinburgh Fringe will be at 3.30pm each day. For tickets or more information, go to https://tickets.edfringe.com/whats-on/ugly-youth